arcs and Crafts: Attempting to Upholster

I found a stool a while back at an arc thrift store and really liked the shape of it but hated the fake leather covering. It was only $4.99 so I bought it with the intent of trying to recover it in a better fabric. That was quite a while ago… I’ve been dragging my feet because I don’t have any experience with reupholstery and wasn’t sure if it was a project I could pull off. But I was surprised at how easy it ended up being.

Here is the stool as purchased:

You can see how the top is sunken in, but it’s got a great octagon shape and the midcentury tapered legs that I search for. I then started my hunt for fabric at arc. Fabrics are usually hung by the sheets and linens at arc thrift stores and there’s always a wide selection. I found some really neat prints that I liked, but I needed a thick and sturdy fabric since it was a piece of furniture.

I ended up buying this beautiful rose-colored velvet, which was priced at $4.99 but the tag was 50% off that week:

I’ve never reupholstered anything but I figured that with my trusty staple gun I would figure it out. The first step was to unfold and lay out the fabric. Then I turned the stool upset down and cut a wide margin around the edge of it.

The second step was to pull the fabric tight and staple just one staple on all but one of the flat sides. I wanted to leave one area open so that I could add stuffing to help with the sunken top. Looking back, I wish I’d left two sides open instead of one because it would have been easier to get the stuffing inside.

I had a bag of pillow stuffing left from another project so that’s what I used to make the stool more rounded on top. I began stuffing. And stuffing. And stuffing. It took a surprisingly large amount to get it full. After I was satisfied with the look of the top, I pulled it tight and stapled the final side down. 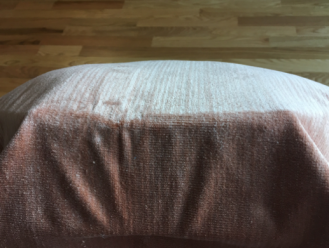 The trickiest part of this was figuring out what to do with all eight of the corners. I’ve seen stools that bunch the fabric over corners but I have also seen ones with precise folds. I went for the folds. As I approached each corner in my stapling, I stopped about an inch before the corner and tucked the stapled side into the un-stapled side. Then I folded the whole thing over and pulled it taut before stapling. 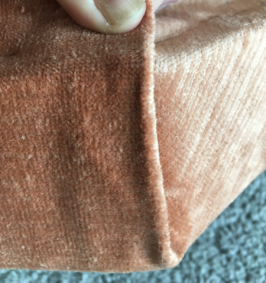 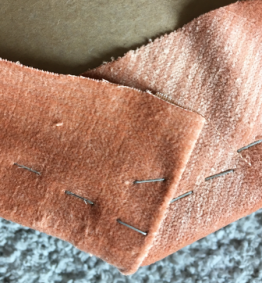 I continued this way until I had folded and stapled all of the sides and corners. After that, it was just a matter of trimming the extra fabric off from underneath. For $7.50 at arc I’m pretty thrilled with how it turned out: 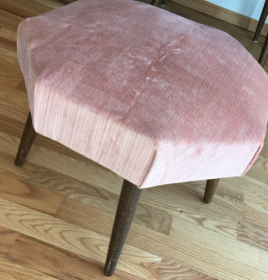 I’m going to do a little refreshing on the legs and run a quick iron over the top of it, and then I think it’ll look perfect in my living room. This was slightly more involved than other projects I have done with arc thrift supplies but it was worth it.